According to the Center for Disease Control (CDC), the rates of sexually transmitted infections (STIs) have been increasing drastically over the past few years. Since 2014, the number of chlamydia cases has increased by 19%, gonorrhea cases by 63%, primary and secondary syphilis cases by 71%, and congenital syphilis cases by a whopping 185%. Certain groups are being more severely affected than others. The CDC explains why this is, and discusses how to decrease the rates of these STIs.

STIs on the rise in America

The STI with the most dramatic rate increase in recent years is congenital syphilis, which infants contract from their mothers during pregnancy. Over 1,300 cases of congenital syphilis were reported in 2018, affecting 33 per 100,000 live births. The disease results in severe health complications and deaths among newborns. The increase in congenital syphilis mirrors the increase in primary and secondary syphilis among women of reproductive age: From 2017 to 2018, cases rose by 36%, compared to cases among women overall increasing by 34%. Men are also affected, accounting for nearly 86% of all primary and secondary syphilis cases in 2018, with gay and bisexual men accounting for 54% of all cases.

Gonorrhea diagnoses have also increased for several consecutive years. Gay and bisexual men are particularly affected, with gonorrhea cases for this group nearly doubling over the past five years. Though cases among women have also risen, they have not done so to the same degree, and data suggests that men who have sex with men are disproportionately affected by gonorrhea.

Chlamydia is the most commonly diagnosed STI, affecting over 1.8 million people in 2018. 44% of these cases were among women age 15-24. This group also risks the most severe consequences of an undiagnosed infection: Undiagnosed STIs cause infertility in over 20,000 women each year. 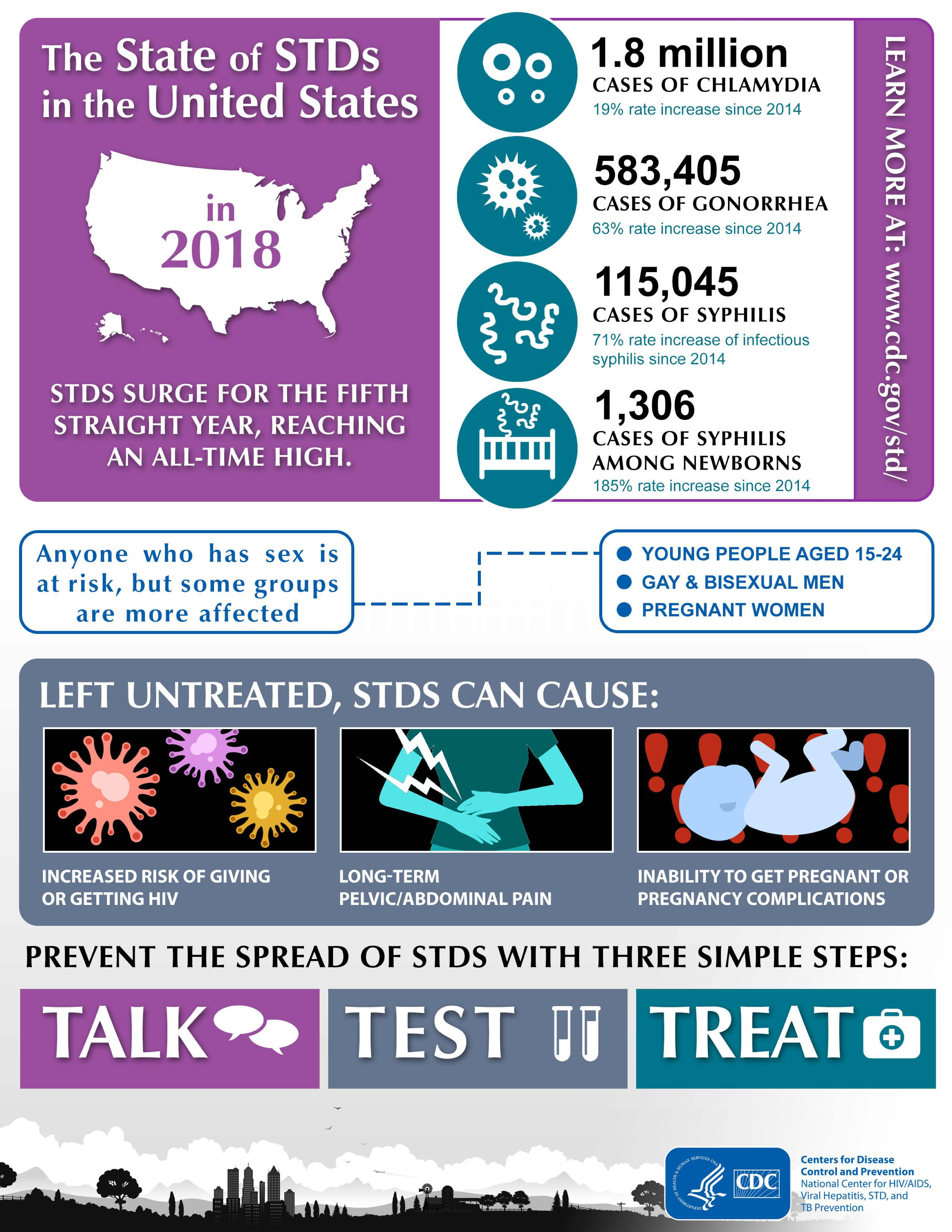 The rising number of STI cases has numerous causes. One big contributor is limited resources among communities regarding state and local STI programs. Many of these programs have experienced budget cuts in recent years, resulting in less staff, less clinic hours, and increased patient co-pays, all of which limit access to diagnosis and treatment services. This in turn results in people who cannot get STI care or education, leaving them open to health complications and making them more likely to spread STIs to others. Although chlamydia, gonorrhea, and syphilis can be treated by antibiotics, these diseases can lead to chronic pain, severe reproductive health complications, and HIV if left untreated.

The CDC believes that everyone will have to work towards the goal of decreasing STI rates if any change is going to be made. The organization works to train frontline workers, respond to evolving STI threats, and provide resources to state and local health departments. Said health departments should direct resources to STI prevention, detection, and treatment programs for vulnerable populations and highly affected areas. The CDC recommends that providers make STI screening and timely treatment a standard part of medical care, especially for adolescents, pregnant women and gay and bisexual men. Your patients may not see the point in STI testing, or they may not be educated about it. Your patients may also feel awkward or embarrassed to talk about STIs or ask questions about sexual health. Let them know that their concerns and questions are normal, and that they don’t need to feel shame about discussing sexual health topics. Encourage them to get STI testing regularly, especially if they or their partners are non-monogamous, and to always use protection such as condoms. Many believe that hormonal birth control can prevent STIs, but this is not the case, so make sure your patients are aware of this.