For the past few decades, the American life expectancy has been either stagnant or decreasing. While the average life expectancy of an American is 78.6 years across the country, it's higher in some states and lower in others. A study recently published in The Milbank Quarterly multidisciplinary journal shows what US state policies seem to lead to a longer life.

Background of the study

In order to analyze the impact of state policies on American life expectancy, the authors of “US State Policies, Politics, and Life Expectancy” merged annual data on life expectancy for US states from 1970 to 2014 with annual data on 18 state‐level policy domains such as tobacco, environment, tax, and labor. They controlled for factors like varying state characteristics and populations, and assessed how policy changes may have contributed to trends in life expectancy.

An unfortunate truth is that the US ranks last in life expectancy among high-income countries. In 2016, life expectancy of American women was 3 years below the female average of high‐income countries and 5.8 years below the leader. Life expectancy of American men was 3.4 years below the male average and 5.2 years below the leader. US life expectancy began falling in the 1980s, when the gains in longevity began to level off and eventually become losses as the years went on. Other studies have explored why this could be happening, and various theories have been considered. For example, Americans tend to engage in more unhealthy behaviors than other wealthy countries. The prevalence of poverty and income inequality in the US is also a factor. But these and other explanations don’t reach the crux of the issue, as the study’s authors pointed out: “Importantly, even if proximal explanations such as smoking, diet, poverty, and medical care did explain the disadvantage [in life expectancy compared to other wealthy countries], they do not explain why Americans used to smoked more, consume more calories, experience higher poverty levels, are less likely to have health insurance, and so on.”

The study found that states that implemented conservative policies were more likely to experience a reduction in life expectancy. The authors estimate that if all Americans had the same health advantages as those in states with more liberal policies, then US life expectancy would be 2.8 years longer among women and 2.1 years longer among men. When adjusted for other concurrent policies, liberal policies in the areas of private labor, tobacco taxes, environment, immigration, and civil rights have had the biggest positive impact on life expectancy. Men and women are each affected somewhat differently, as shown in the graphs below. The estimates shown as gray diamonds are from 18 separate models that each include one of the policy measures. The estimates shown as red diamonds are from a single model that includes all 18 policy measures. 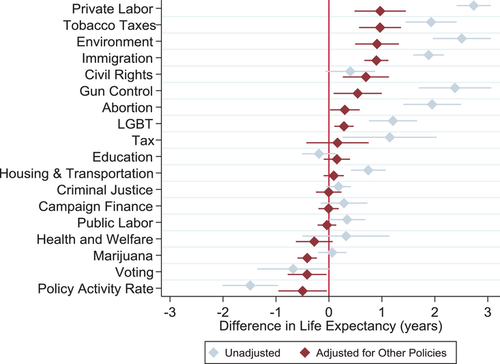 Estimated Difference in Female Life Expectancy Within a US State When a Policy's Liberalism Score Is 1 vs. 0 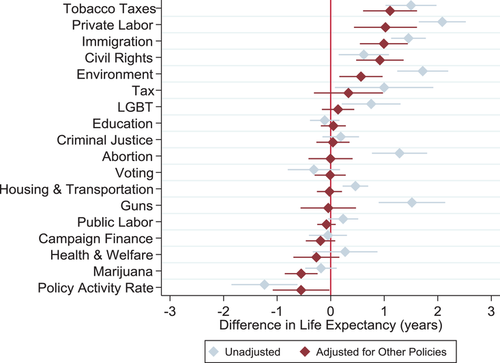 Estimated Difference in Male Life Expectancy Within a US State When a Policy's Liberalism Score Is 1 vs. 0

Within a state, more liberal versions of the policies are generally associated with longer life expectancy. Among the ten policy domains with a statistically significant association with life expectancy, a more liberal version of eight domains was associated with longer lives. These domains include those mentioned above as well as gun control, LGBT rights, and abortion. However, the degree to which policy liberalism is related to longevity varies across policy domains. A third striking observation is that the life expectancy of women is related to nearly twice as many policies as is men’s life expectancy.

There are some shortcomings in the study, the biggest of which is that the analyses done do not prove that state policies have a causal effect on life expectancy. Despite this, the information the study used was extensive and robust, and the findings are consistent with those of other studies and data sets on the subject of policy and health. “Our findings should be considered suggestive evidence and should be replicated,” said the authors.