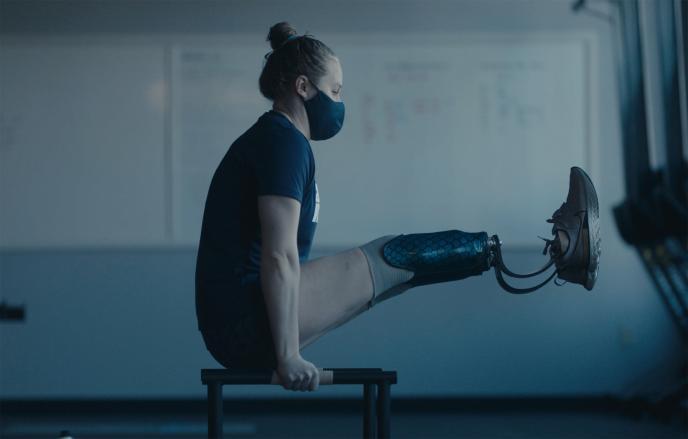 Morgan Stickney, a 24-year-old swimmer from New Hampshire, overcame two below-the-knee amputations to earn a spot on Team USA at the 2021 Tokyo Paralympic Games. She will compete in the 400-meter and 50-meter freestyle events.

The following patient story was originally shared by our partners at Mass General Brigham:

The road to Tokyo was challenging and paved with setbacks. After an eight-year journey to recover from mysterious injuries in both feet, Morgan had a novel amputation surgery known as the Ewing Amputation on two separate occasions at Brigham and Women’s Faulkner Hospital. This cutting-edge procedure was primarily developed by her surgeon, Matthew J. Carty, M.D., Director of the Brigham’s Lower Extremity Reconstruction Program, in collaboration with Hugh Herr, Ph.D., of the MIT Media Lab Center for Extreme Bionics.

Morgan is the first person in history to undergo sequential Ewing procedures. She thought her swimming career was over after her second amputation. But with singular purpose and drive, she completed intensive rehabilitation care at Spaulding Rehabilitation Network and made an incredible comeback.

“I think one of the biggest things that I tell people is not to give up,” Morgan recently said to Boston.com. “Because, I mean, if someone would have told me I was going to go through all of this when I was 12 years old, I would have been like, ‘Absolutely no way.’ Everyone has their battles in life. There’s always someone who’s worse off than you. You just always have to keep a positive perspective. Your life could always be worse—you just have to be grateful for what you have.”

"I think one of the biggest things that I tell people is not to give up. Because, I mean, if someone would have told me I was going to go through all of this when I was 12 years old, I would have been like, ‘Absolutely no way.’ Everyone has their battles in life. There’s always someone who’s worse off than you. You just always have to keep a positive perspective. Your life could always be worse—you just have to be grateful for what you have."- Morgan Stickney, Paralympic swimmer

Foot injury triggers a cycle of surgeries and painkillers

As a teen, Morgan was ranked as a top-20 American freestyle swimmer. But in 2013, she sustained a minor foot injury: a broken sesamoid bone in her big left toe. It was the beginning of a years-long cycle of pain, surgeries, and painkillers.

Morgan swam for three years following the injury. During her freshman year of college in 2016, the pain worsened. Doctors removed a second broken sesamoid bone, but relief never came. The only remaining treatment option was prescription pain medication.

Morgan’s pain was constant. Her life had changed so much—the once active athlete now needed a scooter to travel around campus. Morgan worried about opioid addiction, overdose, and side effects. Painkillers dulled her once upbeat personality and made it difficult to focus on homework and exams.

Morgan developed a staph infection in her injured foot in 2017. Desperate to end her medical setbacks and pain, she researched amputation options and learned about the novel Ewing procedure. In 2018, at age 20, she made the difficult decision to have this below-the-knee leg amputation, offered by Dr. Carty at Brigham and Women’s Faulkner Hospital.

Inspired by patients who needed complex amputations following the Boston Marathon bombing and with support from the Gillian Reny Stepping Strong Center for Trauma Innovation, Dr. Carty and his collaborators reimagined the way a traditional amputation was done.

He first performed the surgery on patient Jim Ewing in 2016. Jim had fallen from a cliff while rock climbing, leaving him with severe damage to the nerves and bones in his left leg. The Ewing Amputation uniquely preserves normal signaling between the muscles and the brain. It allows using a next-generation robotic prosthesis, capable of natural movement. Patients can control the prosthetic without seeing it.

“In its uninjured state, the human body is a dynamic machine, comprised of many moving parts that function in balance and enable us to do amazing things, like running and dancing, through the coordinated interaction of our brain and our muscles,” Dr. Carty explained.

“Traditional amputations disrupt this dynamic state. As a result, lower limb amputees lose the ability to finely control the muscles in their residual legs and, more importantly, lose the ability to perceive where their limb is in space without looking at it.”

Paralympic training complicated by another setback

After a two-year absence from swimming, Morgan was back in the pool just weeks after her surgery. Her swim times were so stellar that she was invited to join the U.S. Paralympic training program. And best of all, she was happy again.

Morgan set her sights on Tokyo, but she soon experienced a familiar pain in her right foot. Her worst fears were realized when she learned this foot was now dying. At Brigham and Women’s Hospital, doctors identified the root cause of her pain that had confounded others: Morgan had a cardiovascular condition that blocked blood flow to her lower legs. As a Brigham and Women’s patient, Morgan received care from the vascular medicine team and learned her only treatment option was a second below-the-knee amputation.

Despite years of unimaginable setbacks, Morgan returned to training with unwavering determination. In June of 2021, she overcame all obstacles to achieve her goal: She qualified for the Tokyo Paralympic Games.