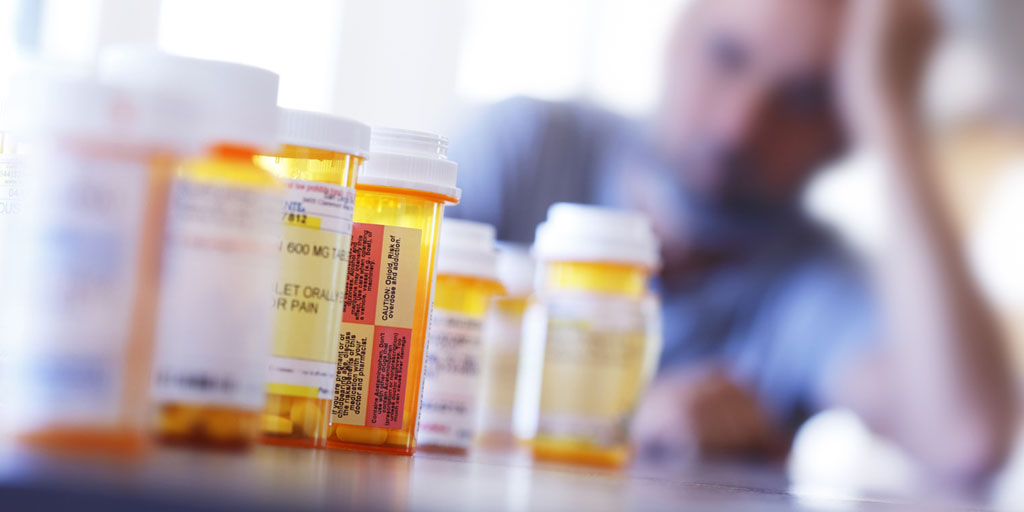 The opioid crisis: what employers can do to help

With the devastating effects of opioid use in daily headlines, you don’t have to look too far to see that the opioid crisis is a serious and troubling problem here in the United States. It’s clear that no family or community is immune, and that includes employers and their workplaces. But, by understanding the problem and working with the health plans they offer, employers can help employees prevent, manage, and recover from opioid addiction.

The 2017 National Employer Drug Survey indicated that more than 70 percent of employers report that prescription opioids are having an impact on their workforce. And a poll of employers by the National Safety Council similarly revealed that 75 percent are directly impacted by the opioid crisis, yet only 17% of respondents feel extremely prepared to deal with it.

The opioid crisis’s roots date back to the late 1990s when prescription opioids became available to alleviate suffering from pain. Initially touted as safe and non-addictive, these medications eventually were determined to be dangerously addictive.

By that point, however, an increase in prescription opioid medications led to broad-based misuse of both prescription and non-prescription (illicit and street) drugs.

In 2017, more than 47,000 Americans died as a result of opioid overdose from prescription opioids, heroin, and illicitly manufactured fentanyl (a synthetic opioid). For the first time in history, Americans were more likely to die from opioid abuse than from a motor vehicle accident. Having reached epidemic levels, opioid use was declared a public health emergency.

Today, the link between street drugs and prescription pain medications is clear, with 80 percent of heroin users reporting they started out using prescription drugs.

Costs to workplace productivity and the bottom line

Businesses nationwide are on the front lines of this threatening epidemic.

Seventy percent of the 14.8 million Americans who abuse drugs are employed, meaning that any given workplace could very well have at least one person struggling with addiction. The economic impact of prescription opioid misuse alone is enough to turn some heads. Including health care costs, lost productivity, addiction treatment and criminal justice involvement, it is estimated that the total cost in the United States is $78.5 billion a year.

More specifically, the annual cost of treating addiction and overdoses has increased more than eight-fold according to a study by the Kaiser Family Foundation, from $0.3 billion dollars in 2004 to $2.6 billion in 2016. And pain-related conditions in particular result in up to $635 billion in medical costs and lost productivity. 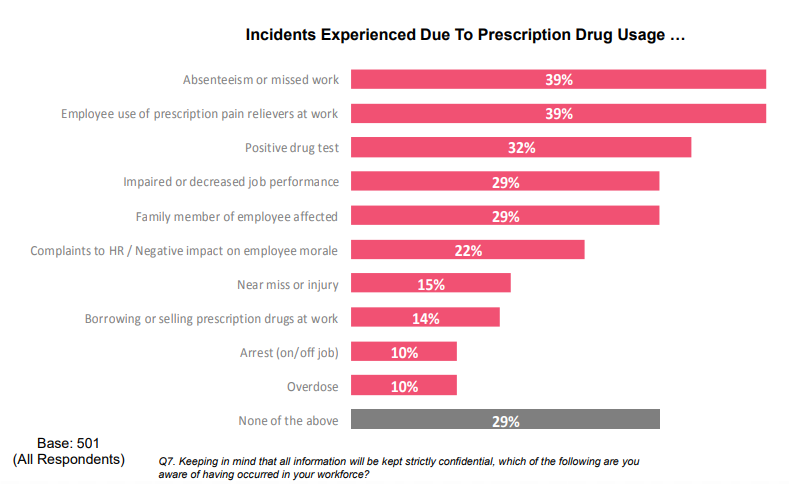 7 in 10 employers have felt some effect of prescription drug usage. Source: NSC.

How employers can take action

A year after the government declared the opioid crisis a public health emergency, a U.S. government survey revealed there has been progress. Fewer Americans are misusing or addicted to prescription opioid painkillers. And more people are getting treatment for heroin and opioid addiction, the survey revealed. But there is more employers can do to combat the opioid epidemic and its impact on the workplace.

In response to recent reports demonstrating the significant impact of the opioid crisis, the Massachusetts Taxpayers Foundation created a new initiative to address the crisis. Mass. C.A.R.E.S, short for Massachusetts Communication and Awareness around Recovery and Employer Support, is a program established to help employers understand the signs and consequences of workplace opioid use disorder (OUD).

The program's mission is to reduce the prevalence of OUD in Massachusetts by having employers play a more prominent role in the solution. AllWays Health Partners has taken the pledge to make our workplace more recovery-friendly, and we encourage all Massachusetts-based employers to take a look at their suggested action steps and do the same.

In addition to the Mass. C.A.R.E.S program, here are 5 ways employers can take action to reduce the stigma and prevalence of opioid addiction.

The National Survey for Drug Use and Health reported that just over 50 percent of people who abuse prescription drugs receive them from friends or family for free. Be the employer who is proactive in educating employees on the proper disposal of unused, unwanted and expired painkillers to avoid them being passed along inappropriately. Some ideas include:

2. Work with your health plan and capitalize on resources from your Pharmacy Benefit Manager (PBM) programs

Your health plan or PBM may have other ways you can address the opioid crisis. Advancements in data and technology have opened doors that enable PBMs to collaborate with health plans/providers to curb opioid misuse and better manage patient care. Utilization management tools such as pharmacy lock-in programs help prevent patients from getting multiple prescriptions and/or using multiple pharmacies for pain medications.

Prior authorization for prescription pain medication and tiered prescription benefits also help reduce substance abuse. For example, AllWays Health Partners has implemented its own programs: quantity and duration of therapy limits and step therapy (where members are required to try an immediate-release opioid medication before an extended release medication is covered).

3. Create a culture of support devoid of the stigma associated with opioid misuse

In a culture where the stigma against opioid use still persists, employers must create an environment where employees are not afraid to ask for help. Recent survey data suggests that 8 out of 10 employees would not come forward for help, due to a perceived stigma in the workplace. Creating this change in culture involves offering support and resources to individuals experiencing an opioid use disorder, or support for those dealing with a family member’s opioid use.

It’s important to make it easy for people to get care, help them come back to work, hold their jobs, and above all, offer them privacy throughout the process. Employee Assistance Programs (EAPs) are instrumental in helping employees in crisis through a difficult time and have the potential to minimize claims dollars through early identification and counseling. 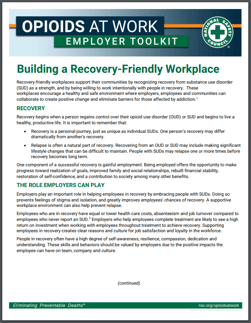 You can also tap into the resources of organizations like the National Safety Council, which offers a free Prescription Drug Employer Kit with everything you need to implement a workplace program on opioids: sample policies, fact sheets, presentations, five-minute safety talks, posters, white papers, reports, videos, and more.

Take a look at how accessible opioid abuse treatment is within your health plan. Once someone comes forward for help, it’s important that he/she has access to the best evidenced-based inpatient/outpatient care and medication assisted therapy from in-network providers.

To keep employees in-network, some employers are changing their benefits to reward individuals for accessing care through participating  providers.

Care management programs for substance use and abuse can also help. These programs, like AllWays Health Partners' Recovery Coaches, for example, are often lead by people with personal experience with substance use disorder who can guide and support members before, during, after, and instead of treatment.

Another simple change that goes a long way is making the antidote, naloxone, available at $0 copay. Naloxone, commonly known by the brand name Narcan, can be lifesaving for people suspected of overdosing on opioids. Check with your insurer to make sure this is covered and better yet, with no copayment.

Some employers have taken steps, either independently or through their health plan, to limit access to prescription opioids. That may take the form of the PBM programs described earlier. It can also include coverage for alternative pain management therapies. New data from the CDC has not shown any evidence opioids were effective in managing chronic pain. It did find, however, that the use of alternative therapies was beneficial.

In one survey, 88 percent of employers reported they are interested in insurance coverage for alternative pain treatments. And health insurers have answered the call: alternative therapies are the new vogue offering, with services such as cognitive behavioral therapy, acupuncture, massage therapy, and physical therapy now covered, often with favorable incentives.

An example of these new offerings is AllWays Health Partners' Care Complement benefit. Care Complement removes cost sharing for many common pain and chronic condition therapies, including a member's first six visits to a physical/occupational therapist, chiropractor, acupuncturist, and more.

By taking a close look at workplace culture, internal programs, benefit plan design, and specific benefits, employers can take action to reduce stigma and provide employees with the support they need to address opioid addiction.