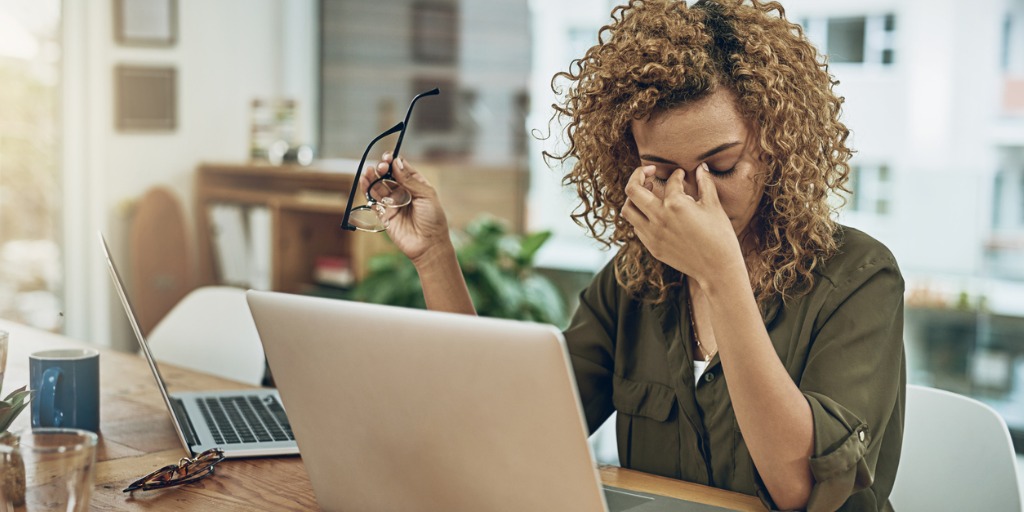 Uncover the impact of cybersickness on today's remote-heavy workforce

Posted by AllWays Health Partners Blog Team on May 27, 2021

As people continue to work from home, we're spending more time than ever attached to devices to conduct meetings, work on assignments, and plan research. Although the amount of time depends on your work-from-home schedule along with your industry, today there are still more than a third of Americans working remotely. Learn more below about how connection overload to computer screens can impact today's workforce.

For some, remote work is here to stay

According to Upwork, “41.8% of the American workforce continues to work remotely. Although an estimated 26.7% will still be working from home through 2021, 36.2 million Americans (22% of the workforce) will be working remotely by 2025. This is a staggering 87% increase from the number of remote workers prior to the pandemic.” With more remote employees, it’s fair to assume an increase in average screen time, in addition to the 5.4 hours the average American spends daily on their mobile phone.

An increase in screen time dialing in for video calls introduced a new term called cybersickness: symptoms such as headache or nausea induced by too much time dialed into a computer or phone screen. Mass General Brigham colleague Dr. Matthew Crowson, a neurologist at Massachusetts Eye and Ear, explained more in an interview with Glamour magazine: “Say you’re scrolling on a screen for a long period of time and it’s filling up your visual field—that can give your body the sense that it’s moving. However, your body knows that you’re not moving. It’s that conflict of signals that drives the symptoms of cybersickness.” If you’re wondering whether you’ve experienced cybersickness, Crowson says, “Dizziness is the prominent complaint. Typically people feel nauseous, tired, and fatigued.”

While the research on cybersickness has typically only considered video gaming, it’s becoming more common for people to have these symptoms due to increased time working on their computers. A recent study found that “cybersickness can linger long after XR exposure and compromise postural stability, hand-eye coordination, visual functioning, and general well-being.” Crowson agreed, telling Glamour cybersickness can last up to seven hours after exposure.

“Your eyes and ears have a balance system that helps your body sense where it is in space. With cybersickness, your eyes think you’re moving, but you’re stationary. It’s a sensory conflict.” In his work, Crowson has also found a strong correlation between migraine sufferers and those who also suffer from cybersickness. The main reason being migraine sufferers are visually sensitive and tend to have issues with motion sickness too.

How to combat cybersickness

To subside cybersickness symptoms, you need to give your brain the visual cues that you’re not moving by looking at anything outside that’s not moving. You can also take an over-the-counter treatment like acetaminophen. Since there isn’t any sign of remote work or smart devices going away any time soon, it’s good to be mindful of how much time you’re spending on screen by taking breaks. Structured breaks are really important,” says Crowson, who recommends 50 minutes on and 10 minutes off your screen. “Even if you’re feeling good at the end of the 50 minutes, it’s still good to take that 10 minutes off, especially if it’s been a trigger before.”