What parents need to know about concussions and teens

It's common for some parents to have that "bracing yourself" moment while watching their teen play sports, especially one that involves contact like football, soccer, or lacrosse. That's because a few moments of particularly heated play and bam, there could be a potential injury on the field. The biggest concern: Is that adolescent going to have a concussion that will affect them for weeks, or even months? For parents looking to ease that worry and uncertainty, here are three facts about concussions, along with some good news that might lighten some parental anxiety.

Concussions may be on the rise

First, the not-so-great news: Adults have good reason to be concerned about concussions among teens. According to research in JAMA this issue among U.S. adolescents has increased, growing from 19.5 percent of teens in 2016 to 24.6 percent in 2020.

However, researchers point out that this is self-reported data and is in contrast with emergency department reports, which show a decrease in traumatic brain injuries during the same time period.

That disparity could mean that fewer teens are going to the ER when they get a concussion, as knowledge about concussion detection gets better among coaches. Another factor is that because a concussion doesn't always involve loss of consciousness, symptoms may arise days later, leading to a visit to a primary care physician instead of an emergency room visit.

Even if your teen only has mild symptoms, err on the side of getting an evaluation sooner rather than waiting to see if the problem improves. Research published in JAMA Neurology looking at 162 teens and young adult athletes found that those who were evaluated within a week of injury recovered about 20 days faster compared to those who waited for two to three weeks. 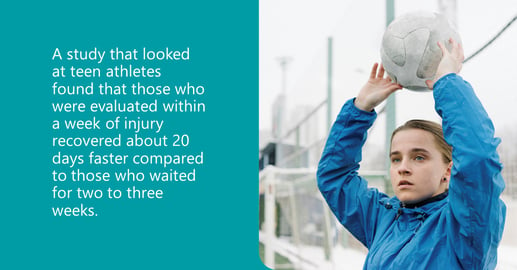 A major part of quicker recovery is awareness of symptoms, especially since many of them might not seem concussion-related. In addition to obvious signs like blurry vision, nausea, and appearing dazed, the Centers for Disease Control and Prevention suggests watching for these issues: 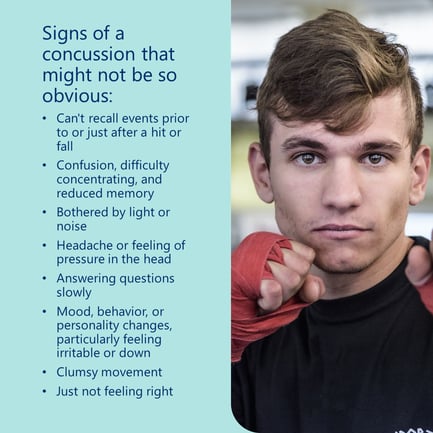 Although imaging such as an MRI or CT scan can be used to find more serious damage to the brain, most concussions are diagnosed by looking at symptoms and doing a neurological and cognitive examination instead, such as testing vision, balance, reflexes, memory, and concentration.

In addition to condensing the recovery timeframe for a teen's concussion, getting an evaluation earlier and determining whether a concussion really happened is crucial because research indicates someone who has this type of brain injury—no matter what the age—is more likely to get subsequent concussions, and if that happens, the symptoms can be much more severe.

Not long ago, concussions used to be treated as if they were migraines; patients were advised to lie as still as possible, for days at a time, in a darkened room. They have steered away from "mentally challenging activities" like schoolwork or other reading.

While that's still recommended in many cases for the first one or two days—called the acute symptomatic phase—updated guidelines from a group of team physicians presented at the American College of Sports Medicine meeting in 2020 noted that this practice, usually called "cocooning," should be as brief as possible and may not apply to everyone with a concussion. They note that returning to light activity, even within a week of concussion, may help shorten recovery timeframes.

The group added that each concussion is unique in terms of symptoms, so there's no "one size fits all" strategy, but that knowledge around the importance of activity is improving the recovery phase of concussion treatment.

The biggest strategy you can take to help your teen? Have a conversation before a concussion happens. Some research suggests that less than half of high school athletes report their concussions because many feel pressured to play through symptoms or minimize the problem. That can lead to complications, sometimes even fatal ones, so discussing symptoms with your teen and making sure they know about the seriousness of concussion management can go a long way toward safety on the field—and greater relief and enjoyment for those in the stand.

To learn more about physical wellness, plus a fresh perspective on overall health and wellness, download our free eBook.